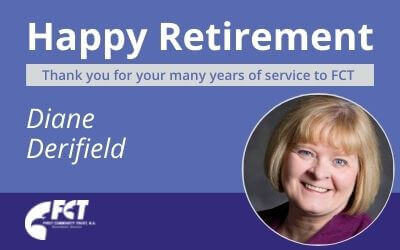 FCT Vice President, Diane Derifield, has announced her plans to retire on March 31st. Diane has been an integral part of the FCT team for many years. She brought decades of experience working in the trust industry and passionately helped her clients.

Prior to joining FCT in 2001, Diane worked at US Bank in the trust department for 15 years. Diane said joining the FCT team was a great way to finish her working career. In honor of her retirement, the FCT team members celebrated Diane’s career during their March staff meeting.

Her post-retirement plans include taking more trips with her husband on their Harleys and traveling to Chicago to enjoy a few Cubs games. Please congratulate Diane on this work milestone.