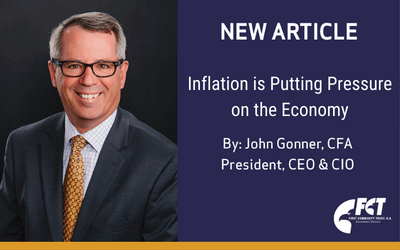 Inflation is Putting Pressure on the Economy

As first seen on biztimes.biz

Many times since the financial crisis 14 years ago, experts have sounded the alarm about the coming inflation, but it failed to materialize.  Well, it has arrived.  The Consumer Price Index has increased from 1% to 8.6% in the last two years.  That is a 40-year high.  As a result, the Fed is aggressively increasing interest rates and reducing the size of their balance sheet, which pulls money out of the economy.  The combined monetary tightening is a dramatic shift from the pandemic related stimulus and easy monetary policy of the last couple years.  This swift and aggressive policy change increases the chances of the economy slowing into a recession.  In the last 13 Fed tightening cycles, 10 of those resulted in recessions.

The Federal Reserve is fighting to keep a lid on consumer’s long-term expectations for inflation.  The high inflation period of the late ‘70s and early ‘80s persisted for many years and became ingrained in inflation expectations.  In that era, people would hurry to buy something before the price went up again.  The current high inflation is less than a year old, and thus far, long-term inflation expectations (measured by market/TIPS breakeven rates) remain near the Fed’s 2% target.  That is why today, in contrast to 40 years ago, people put off purchases at these high prices, anticipating that prices will come back down.

The economy has already begun to slow.  GDP growth in the first half of the year was likely negative.  There is evidence that inflationary pressures will moderate in the second half of the year.  This will allow the Fed to reduce the pace of interest rate increases and eventually stop raising them all together.  One of the factors contributing to the high inflation data is the impact of the supply chain disruptions.  For example, one reason there are very few cars available at the dealership is due to a lack of computer chips.  However, chip companies and auto manufactures are both saying that these shortages are improving and are expected to continue to improve in the second half of the year.  An improving supply of vehicles would allow new and used vehicle prices to moderate without reducing GDP.

One thing that I believe will keep long-term inflation expectations low is the deflationary impact of technological advances.  As an example, the recent wide adoption of Zoom for virtual meetings and DocuSign for electronic document signing allows business to be conducted quicker and with less cost.  The time and money saved by millions who use these technology advances helps keep costs (and inflation) down.  There are many other examples and the cumulative disinflationary effect of it all is significant.

High inflation and the actions by the Federal Reserve have had a big impact on the stock and bond markets.  The bond market is down this year because as interest rates rise, bond prices fall.  Interest rates on some government bonds have increased by over 3 percentage points and the bond market is off to its worst start to a year ever.  The stock market has suffered too.  After the May inflation number came out, the S&P 500 joined the NASDAQ index and small-cap index in bear market territory.

The terrible returns in the markets have taken a toll on people.  The University of Michigan Consumer Sentiment survey showed a significant drop in May.  Respondents’ assessment of buying conditions for durable goods was the lowest since the question began being asked in 1978.

Consumer spending accounts for about 70% of GDP and is the key to the US economy.  One thing that may help the economy avoid a recession is the $2.6 trillion in extra savings in the hands of consumers, which they were able to accumulate over the last two years from economic stimulus and reduced spending.  The employment picture is very good as well.  Unemployment is currently at just 3.6%.  On top of that, there are twice as many open jobs as there are people looking for work.  This is an extraordinarily good jobs picture and along with the healthy consumer balance sheets, bodes well for the consumer’s ability to maintain spending in the face of higher prices.  It is very unlikely for the economy to go into a recession with unemployment below 4%.

The stock market has had several “90% down days” in late May and June, where 90% of stocks are down for the day.  Also, as of mid-June stocks had been down 10 out of 11 straight weeks.  This is evidence of indiscriminate selling which is an indication that we may be nearing the end of the bear market.   Additionally, there is ample economic evidence that some prices and activity are starting to cool off.  All of the following have moderated significantly: lumber prices, housing starts, the backlog of unsold homes, shipping rates, used car prices, and the Leading Economic Indicators.  The Fed may not need to raise rates as much as they currently expect to.

A recession occurring yet this year remains unlikely but, unfortunately, the odds have increased for one in 2023.  A big concern about a recession for investors is that they have a bear market associated with them, but that is water under the bridge at this point.  I believe the odds of a recession are still less than 50/50 but even if there is one coming, we have already had the bear market.  I don’t think it is too early to start preparing for the recovery.