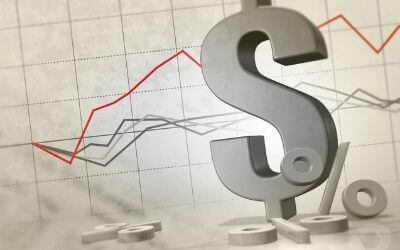 Investors should keep an eye on inflation

Helping to fuel the economic recovery is a double-barreled shot of two powerful forces: very accommodative Fed policies, and massive fiscal stimulus.  Along with holding short-term interest rates at near zero percent, the Fed is buying $120 billion in bonds every month.  This is pumping liquidity into the economy.  In addition to the support offered by the Fed, fiscal stimulus in the last year and a half has amounted to an incredible 27% of GDP.  That is almost four times more than what was applied to the housing and financial crisis of 2008.

All of this stimulus, along with effective and plentiful vaccines, have unleashed a roaring economic recovery.  As a result, pent-up demand is colliding with supply shortages.  Manufacturers are having supply chain issues and service businesses are struggling to find workers.  Even though there are 9.3 million unemployed people, there are a record number of open jobs (also 9.3 million) and a record number of people voluntarily leaving their jobs.  Businesses are offering enhanced pay and benefits to attract workers so it should be no surprise a record percentage of businesses are planning to raise prices on top of the many that already have.

Prices are rising, and we now have the highest inflation numbers in decades.  April and May’s increase in core CPI were the first and second largest monthly increases in 40 years.  The Fed is being patient and insists that much of this inflation is transitory.  While these numbers are exaggerated by the low, pandemic-influenced, comparisons of a year ago, the concern is that some amount of inflation will persist.

Another reason for the increase in inflation numbers is the fast increase in the money supply.  The Fed’s balance sheet has soared to nearly $8 trillion which is almost double what it was pre-covid and is 8 times more than it was before the financial crisis.  The M2 broad measure of money supply has increased by 30% in the last 16 months, growing at twice the rate of past periods.  Too much money chasing too few goods results in inflation.

Persistent inflation above 2% would be bad for the markets.  Bond investors would require a higher yield to compensate for the loss in purchasing power due to inflation. Currently, the 10-year treasury bond is yielding 350 basis points less than inflation.  If bond investors lose faith that the inflation numbers will come back down, they will demand more yield.  When interest rates rise, bond prices fall, and bonds will produce negative returns.

Typically, price pressures emerge late in an economic cycle.  Now we are seeing the largest increases in decades early in the economic recovery.  The recession was unique because the economy was forced to shut down due to the pandemic.  The recovery has also been unique because you only re-open an economy from a shutdown once.  The inflation we are seeing is not that unusual.  It is a result of too much money chasing too few goods.  Material and labor costs are rising and some amount of that will be persistent.

Pretty much every time in the last couple decades that we have gotten concerned about inflation, those concerns proved to be unfounded as actual inflation has been elusive.  Most investors today do not have experience investing in an inflationary environment.  So far, the market is behaving as if the Fed is correct, and the current inflation will not last.  The consequences to stock and bond prices if the Fed is wrong and inflation persists are pretty significant, so this issue requires the attention of investors.