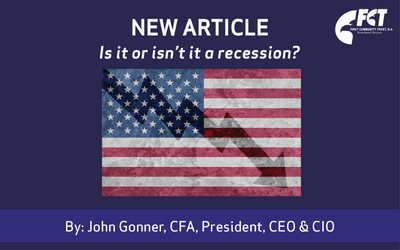 Is it or isn’t it a recession?

As first seen on CUInsight.com.

Most people have heard that a commonly used definition of a recession is two consecutive quarters of negative GDP (Gross Domestic Product) growth. GDP measures the value of all the goods and services produced in the U.S. When GDP growth declines, the economy is declining.

The official determination of a recession is a little more complicated. The National Bureau of Economic Research (NBER) has a Business Cycle Dating Committee that is charged with officially determining when a recession starts and when it ends. The NBER is a non-profit research organization formed in 1920 “committed to undertaking and disseminating unbiased economic research.”

The Business Cycle Dating Committee defines a recession as a “significant decline in economic activity that is spread across the economy and that lasts for more than a few months.”  The committee considers factors such as personal income, employment, personal consumption, retail sales, and industrial production.

In the first two quarters of this year, even though GDP was negative, industrial production and employment remained strong and do not seem to suggest that a recession has started. It is possible that these items will weaken, and a recession will be determined to have begun. The Business Cycle Dating Committee will then look at the data to see when activity had peaked and that will mark the end of the expansion that began in June of 2020 and the beginning of the recession. In some cases, like 2020, the recession end date ended up being before the committee had even announced one had begun. In June of 2020, the committee announced that a recession began in April. The recession was eventually determined to have actually ended in May 2020.

For the NBER, it is more important to accurately determine the timing of the beginning and end of the economic cycle and they are not as concerned with making the call quickly. For timely business and investment decision making, you’ll want to look at the data yourself to see the direction it is going.  If you start to feel overwhelmed, there are many helpful tools available and experienced partners, including First Community Trust, to help your credit union and members sort through the most relevant data in order to make sound financial decisions for the future.