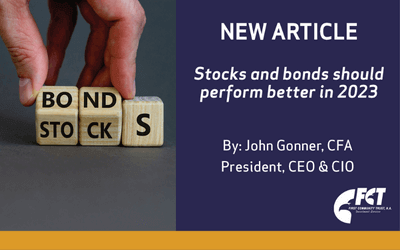 Stocks and bonds should perform better in 2023

As first seen on biztimes.biz.

There is no doubt, 2022 was a bad year for investment returns. It was especially bad because while stocks entered a bear market (down more than 20%) bonds also were having the worst year in many respects.

This is a nasty and unusual occurrence. If you look at each time the stock market was down in the past four decades, the bond market was positive every time. When stocks had a three-year bear market in 2000-2002 (technology bubble bursting and 9/11) where stocks declined by a total of 38%, the bond market was up each of those years by an average of 10% per year.

But through September of last year, not only was the stock market down 24%, but also the bond market was down by 15%. So even a conservative mix of stocks and bonds would have been down 16%-18% in just nine months. Both improved in the fourth quarter, but it was a difficult year for investors.

To put the bond market returns in perspective, in the 42 years from 1980 to 2021 the bond market produced a negative return just four times. The worst of those was in 1994 (another year when the Federal Reserve aggressively raised interest rates) when the return was negative 2.9%. The year 2022 was about four times worse than the previous worst year. The bond market also had a loss in 2021, making last year the first back-to-back negative years for the bond market.

The cause of the disaster in the markets has been aggressively rising interest rates, which are a result of high inflation. In the two years from June 2020 to June 2022, the Consumer Price Index (CPI) increased from a scant 0.6% to a whopping 9.1% That is astonishingly runaway inflation.

We haven’t seen anything like that in more than 40 years. Inflation started rising significantly in the second quarter of 2021, when it reached 5.4%. But at the time the Fed believed the higher inflation mostly was due to supply chain disruptions and would be only temporarily elevated. The Fed was stimulating the economy with 0% interest rates and by putting cash into the economy through bond purchases. At the beginning of 2022 the members realized they were wrong. They abruptly changed course and they aggressively raised interest rates and started pulling money out of the economy.

Inflation has started to improve, declining from a high of 9.1% in June to 7.1% in November. The Fed has started to slow the pace of interest rate increases and is projected to stop raising interest rates in the first half of the year. If inflation continues to moderate as it is expected to do, it will provide a much more positive environment for investment returns even as the economy slows and risks of slipping into a recession remain.

If interest rates stop going up and possibly even decline, returns on bonds will go from double-digit negative in 2022 to mid-single digit positive in 2023. Likewise stock returns should improve dramatically.

Stocks are frequently referred to as a “forward looking animal.” Stock prices historically move up and down well in advance of changes in the economy. The bear market in 2022 was reflecting the slower economy and lower earnings expected in 2023. However in 2023, I expect the stock market will move up in anticipation of the recovery in economic activity that will follow the slowdown.

The biggest risk would be if the inflation numbers do not continue to improve. An area of concern for the Fed is the tight labor market, which is causing wage inflation. The number of open jobs for each person officially looking for work is the highest it has been in 50 years, and by a significant amount.

It will take time for the supply and demand for workers to come back into balance. This could cause interest rates to stay higher for longer and could deepen the economic slowdown that is expected. If the unemployment rate increases from 3.7% to 4% or a little higher, I think it would be positive for the markets.

Another issue is that there are distortions in the economy related to the pandemic and the economic stimulus that followed. There are excess funds in the hands of local governments, businesses and individuals and that is likely hampering the Fed’s job of lowering inflation quickly.

I expect the inflation numbers to improve in the first quarter as some of the big increases from last year start to drop off the report. Interest rates will level off and possibly decline improving bond market returns dramatically. Even though the economy is likely to continue to slow, the stock market will start to look ahead to economic recovery and stock prices will begin to recover.